In 2009, Lino Miele, after many workshops held in Milan throughout the years, has finally opened the second Ashtanga Yoga School in Italy, after Rome, together with some students trained under his guide.

Mario Bucchich, Pinuccia Buscaglia and Sandra Mazzucchelli still carry out the purpose of the School today: the teaching and diffusion of Ashtanga Vinyasa Yoga practice and philosophy in its most traditional form, as taught by guru Sri K. Phattabi Jois. 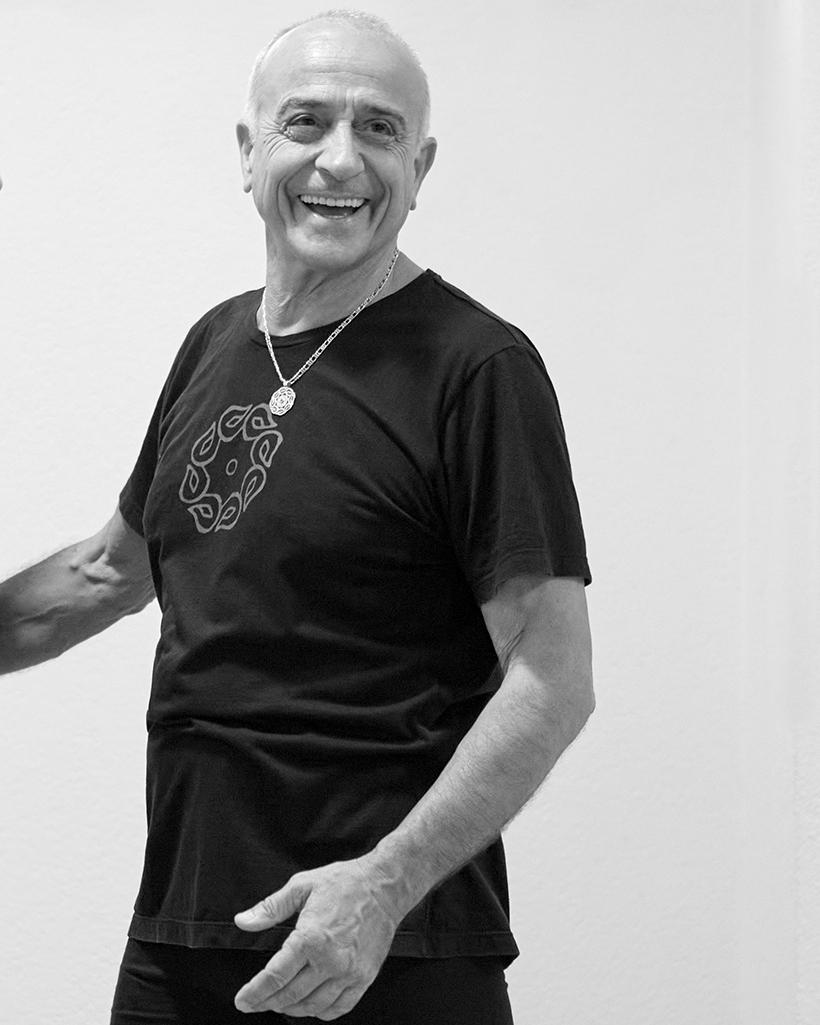 Lino Miele initial interest in yoga dates back to the early 1980s when he starts traveling in India in search of a guru. In 1988, he met Sri K. Pattabhi Jois (“Guruji”), and thus began a long-term, teacher-student relationship, becoming a devoted Ashtanga yoga student.

In 1993, under the guidance of Guruji, he publishes the first book on Ashtanga Yoga which gives a clear reading of the method of the first and second series.
And in 1994, Lino, together with very few other students, is certified by Guruji to teach Ashtanga Yoga.
He opens, with SKPJ approval, Ashtanga Yoga traditional Schools in Finland, Denmark, Argentina in addition to Rome and Milan.

Lino Miele regularly holds workshops and retreats in Italy and around the world. 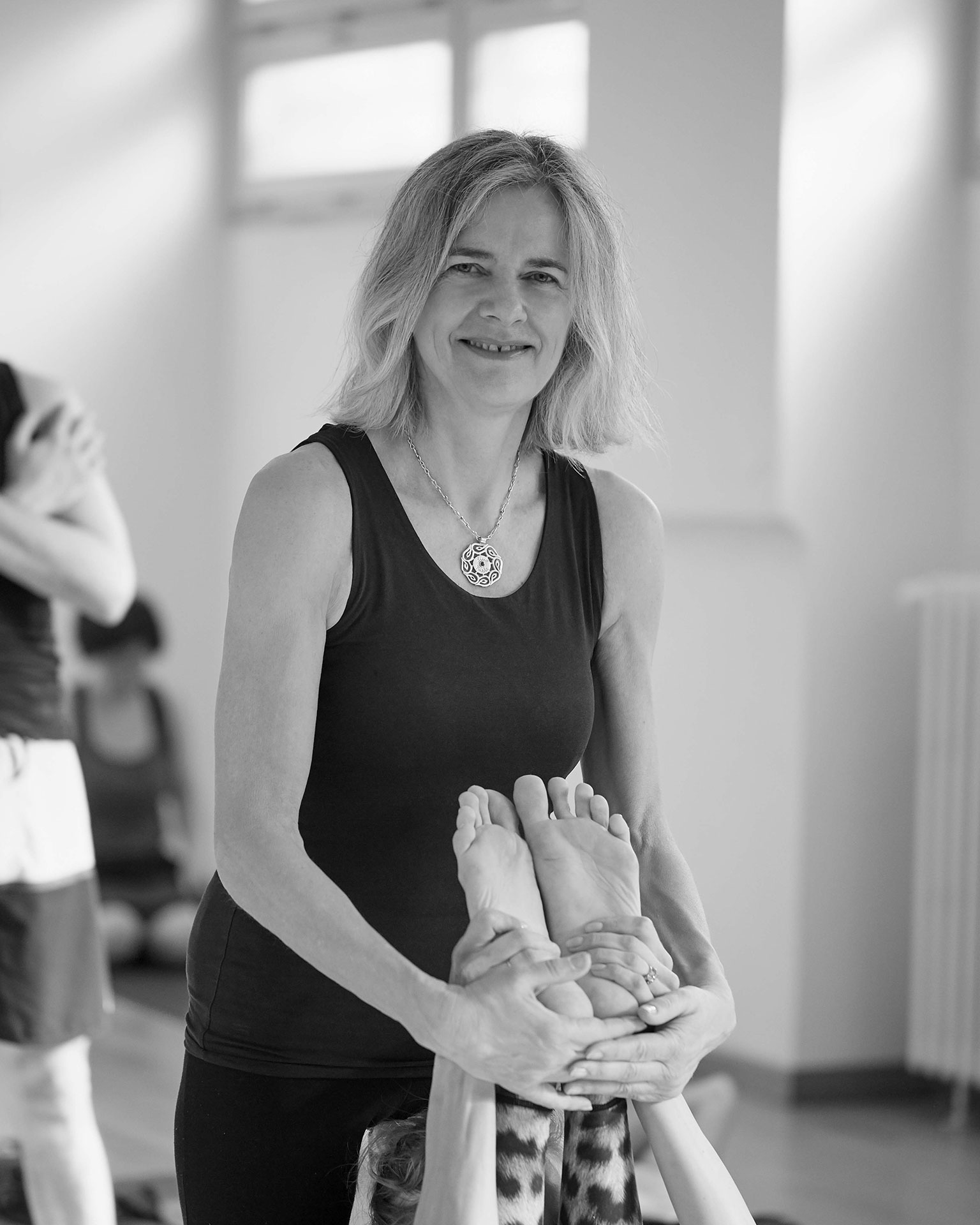 In early 1999, Pinuccia enrolled in an Ashtanga Yoga class in an attempt to seek balance in her hectic manager life. Six months later, she meets Lino Miele in one of his workshops and, little by little, his life begins to change.

In 2001 she starts to assist Lino and by the end of 2002, she left her job to devote herself to the study of Ashtanga Yoga. She assists Lino in Kovalam during his winter retreat and joins him in Mysore to practice with Sri K. Pattabhi Jois in 2004.

She then started teaching in Milan and in 2009 she was one of the founders of the Astanga Yoga School in Milan, where she teaches every day. Sweet, but firm, she won’t let you pass one.

When Sandra meets Ashtanga Yoga in the 90s, she is already in mature age. Thanks to the incredible energy and well-being that practice gives her, she right away understands that she is at a turning point in her life.
She constantly follows his teacher, Lino Miele, in his workshops both in Europe and in India.
A few years later, Lino himself encouraged her to teach in Milan with Pinuccia Buscaglia, it was 2004.
In 2009, her dream finally came true: together with other Lino’s students, she founded the Ashtanga Yoga School in Milan.
Sandra teaches daily at school, and always welcomes you with great sweetness. 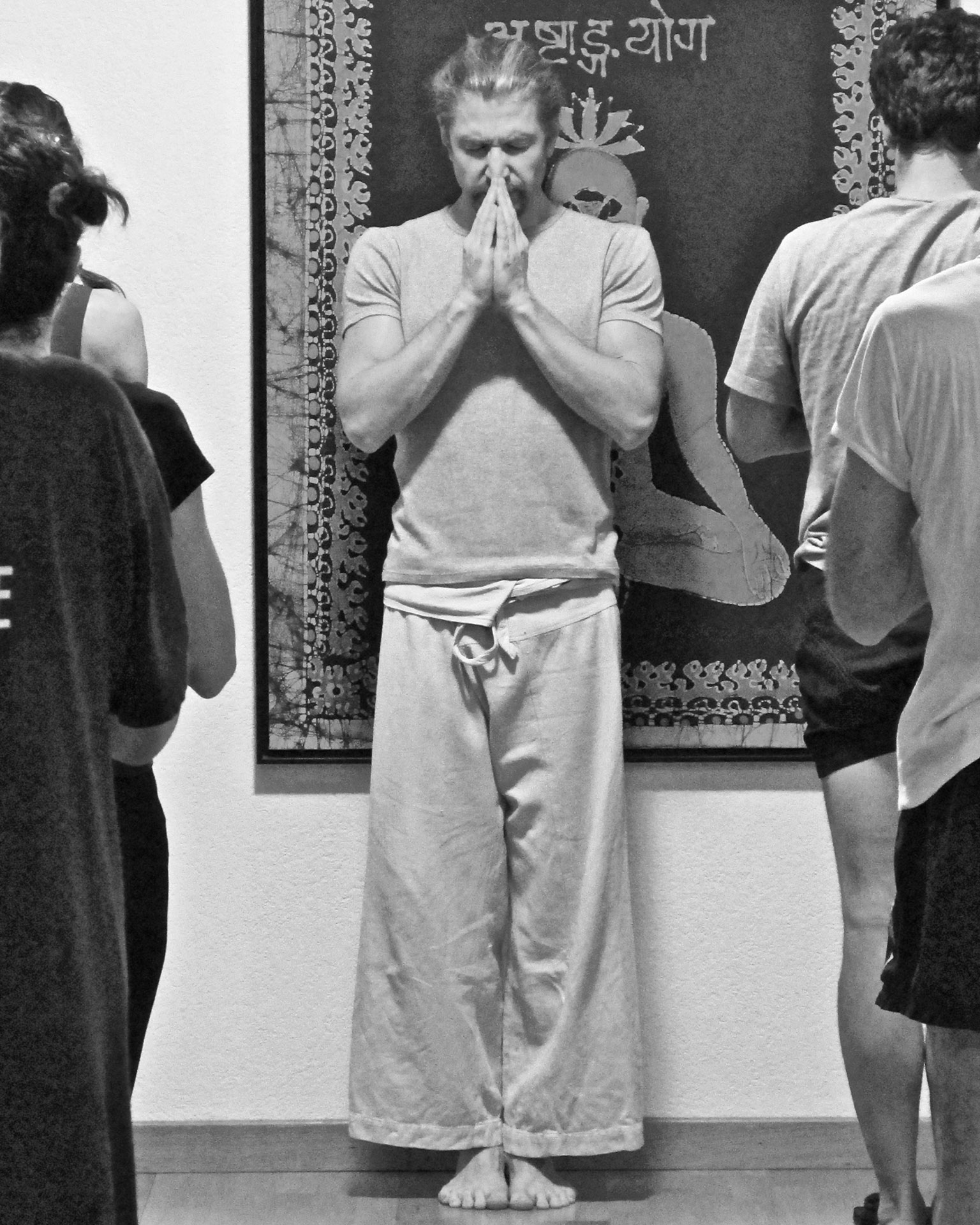 Always sporty, in particular, he practiced Judo at a competitive level, Mario met Lino Miele in 2003 and his teaching charisma hit him directly in the heart.
Fascinated by the vinyasa system and the depth of breath of Ashtanga yoga, Mario begins daily practice and follows Lino Miele in his workshops all over the world, up to Mysore.
In 2006, he began to assist Lino and in 2009, he was one of the founding teachers of the Milan School.
Today, he divides his time between Milan and Argentina where he spends long periods with his son and teaches at the Ashtanga Yoga School in Puerto Madryn, Patagonia, which he contributed to found. 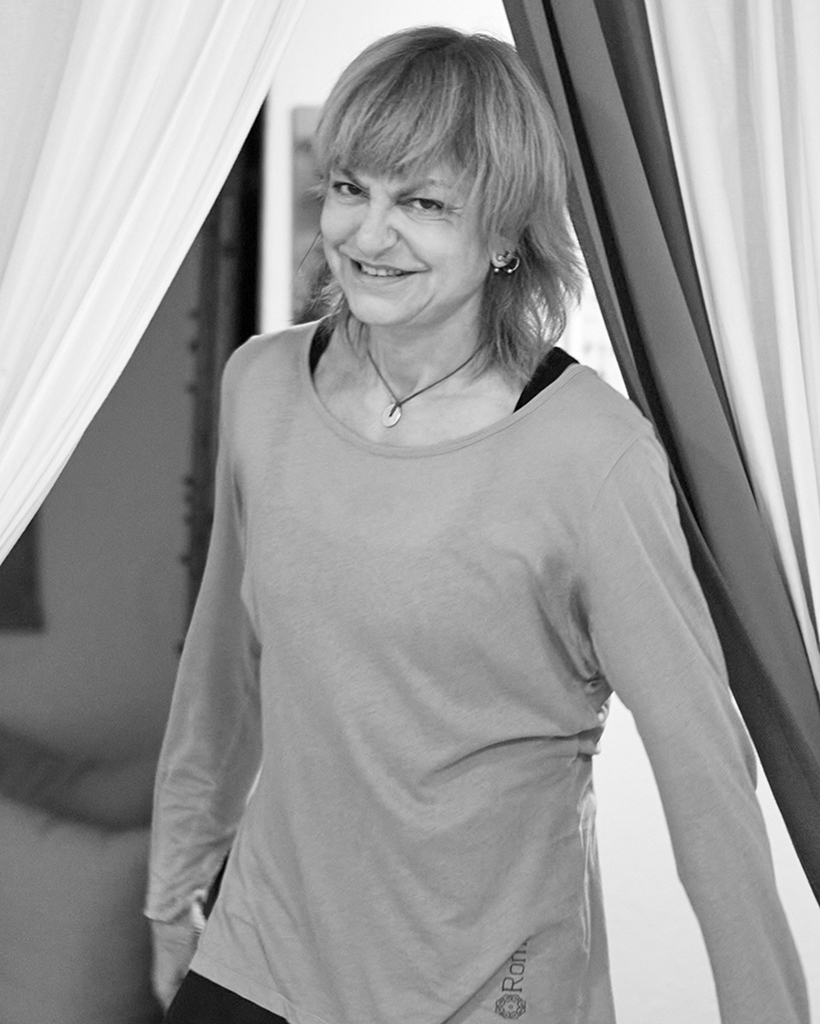 Globetrotter, she lived first in London than in Miami, always passionate about fitness, Nadia met yoga in 2006, after a long experience both as a practitioner and as a bodybuilding teacher. However, the meeting with Lino Miele two years later will make her make the definitive leap.

Ashtanga becomes her daily practice, a long and continuous path of inner transformation, and a few years later she leaves the gyms to teach in the shala.

In 2011 she was authorized to teach Ashtanga yoga by the Ashtanga Yoga Research Institute in Rome. 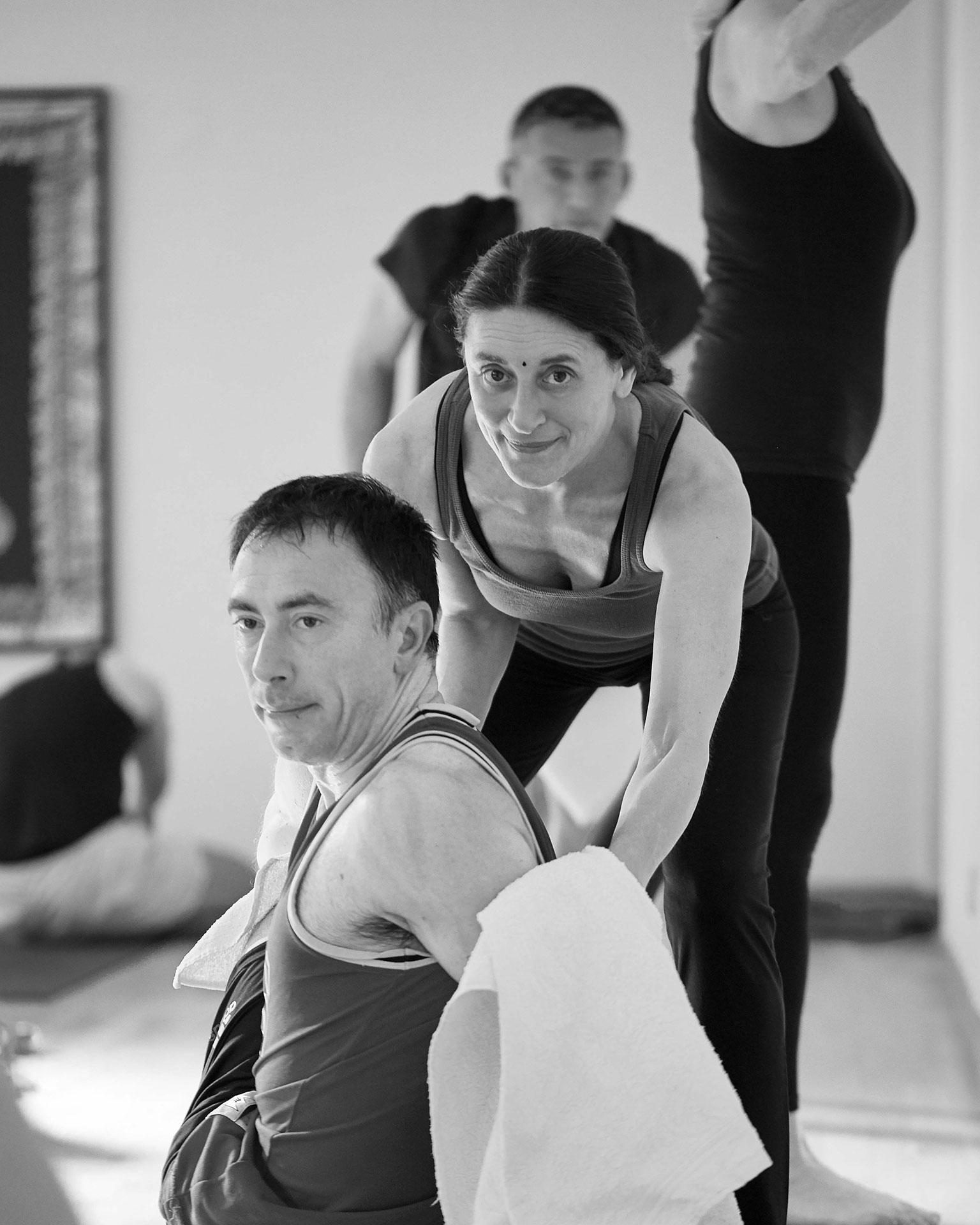 Lella was practically born into yoga and fitness. She met Ashtanga in 2005 after twenty-five years of practicing and teaching Hatha yoga and other physical disciplines. She immediately senses that the energy, awareness and inner balance that Ashtanga transmits to her have a strong impact on her life.
She, therefore, decides to devote herself entirely to this discipline, while continuing her research path in Eastern philosophies.
She follows Lino Miele in his workshops in Italy and abroad and in 2008 she begins to assist Pinuccia Buscaglia and Sandra Mazzucchelli.
In 2011 she was authorized to teach Ashtanga yoga by the Ashtanga Yoga Research Institute in Rome. 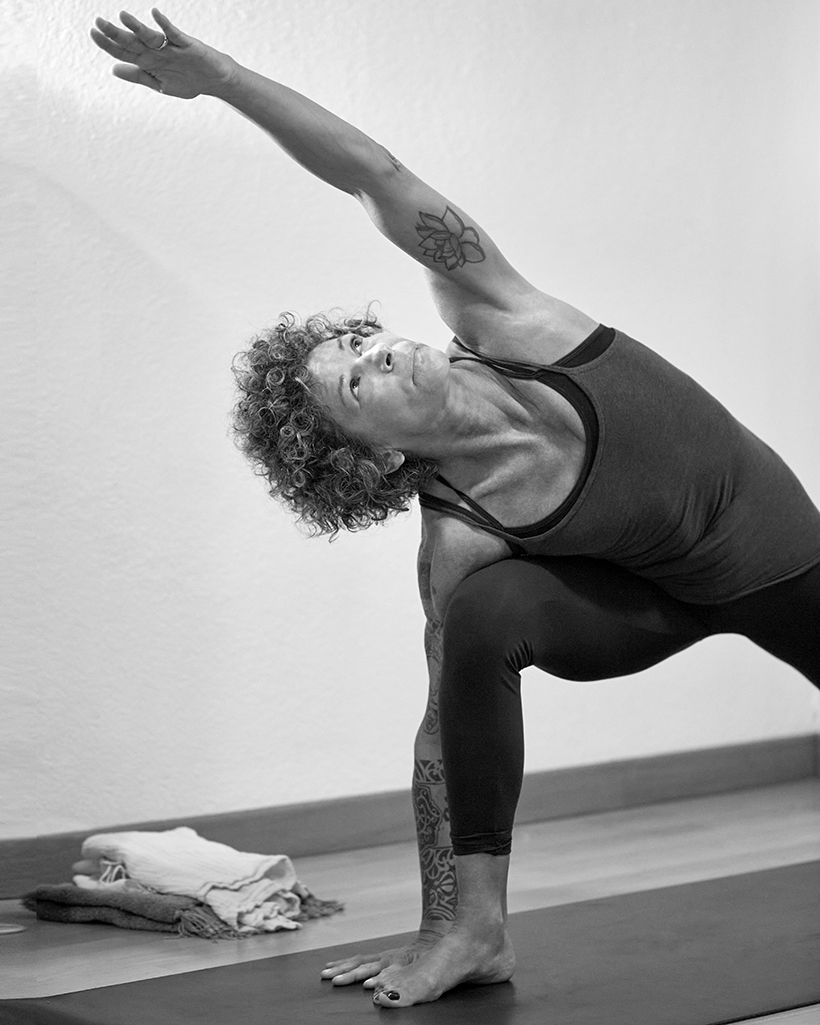 Laura meets yoga over 20 years ago and since 2013 she is enrolled in the Yoga National Teachers Association (YANI). Her desire to explore and discover this discipline leads her to follow different masters, even directly to the source, in India, in particular deepening Hatha yoga. Together with yoga, he also practiced and taught Dainami, a discipline that combines Pilates, Gyrotonic, and Ayurveda.

Finally, her research led her in 2015 to the Ashtanga Yoga Milan School in Via Caldara. Here she understands that she has arrived home.

In September 2020 she was authorized to teach Ashtanga yoga by the Ashtanga Yoga Research Institute in Rome.